6 MISTAKES THAT ARE SABOTAGING YOUR FITNESS RESULTS

You put your time in at the gym and eat right. You strength train and do cardio. But still, you’re not seeing results. You’ve been at it for months and yet it seems the scale doesn’t budge and your muscles won’t change. It’s frustrating and defeating when you’re putting the time and the effort in but not seeing any changes. Don’t give up hope and throw in the towel yet because, chances are, there’s a way to turn things around. Below, the top six workout mistakes that keep people from getting stronger, explained.

1. You don’t give yourself enough rest

Overtraining is common among those who love to exercise, but the reality is that rest is just as important as the workout itself. A lack of rest increases the risk of overuse injuries and there’s also the risk of overtraining, or exercising beyond the body’s ability to recover properly. This can lead to hormonal imbalances, fatigue and a decrease in strength.

How much rest one needs depends on factors like age, fitness level and training volume. Try to train each major muscle group two to three days per week and rest 48 hours between training sessions, as recommended by the American College of Sports Medicine.

2. You eat too few calories

When getting fit is your goal, the desire to eat clean is strong. However, there’s a difference between eating healthy and not eating enough. If your calorie deficit is significantly lower than 500 calories, the maximum amount for weight loss, chances are you won’t see much progress on the scale, as your body will adapt to burning fewer calories in an attempt to hold on to fat.

Likewise, if building muscle is your goal, eating too few calories will negatively impact any potential gains, as your body will focus on essential functions like breathing and regulating blood pressure rather than building muscle. Under-fueling also affects your power levels. While it may feel like you’re working intensely, your actual power output won’t match. Finally, not eating enough can make your recovery null and void; your body will use any protein you eat as fuel for energy rather than to repair and rebuild muscle. Eat a diet high in lean protein, lots of vegetables and healthy fats, and make sure you’re eating enough.

3. You perform exercises with improper form

Performing movements efficiently is an often-overlooked aspect of getting the most out of your workout. If your form is incorrect, not only do you risk injury by straining the tendons, joints and ligaments, it’s likely you won’t work the muscle correctly or see results. You’re only as strong as your imbalances so if you’re aware that you have weak glutes or poor hip flexibility preventing you from performing movements correctly, work on strengthening those weak links.

4. You don’t work out with enough intensity

Be honest with yourself about whether you’re working hard enough. Strength is related to the maximum load you can lift or move, but old habits die hard and most people get accustomed to sticking with the same lifting regimen. If that’s the case, you won’t see the desired gains. There are a number of ways to add intensity and increase your heart rate, such as adding cardio intervals, increasing the weight and adjusting the number of sets and reps accordingly (for instance, eight reps instead of 15), adding instability, explosive movements, training one side at a time, incorporating circuits or working to failure.

5. You do insufficient sets and reps

There are a number of mistakes lifters make when it comes to the set/rep configuration. One common mistake made most often by beginners is lifting too light with too many reps. Focusing on lifting heavy with fewer reps, try the four-to-six or five-to-seven rep range, you can save time in the gym and see much bigger strength gains. If you’re stuck in a cycle of doing high amounts of reps, chances are you’re also doing too much isolation work focusing on one muscle at a time. Concentrating on compound movements that work multiple muscles at a time, mimicking the way the body moves in real life, renders better results. Not only will you save time, you’ll recruit more muscle fibers to work, which stimulates muscle-building hormones to build more strength in a shorter amount of time.

6. Your training is unbalanced

If you’re not seeing the results you want, there’s the potential that you’re not training all muscle groups evenly. It’s important to put some thought into what muscle groups you train on which days so that each muscle group can be worked to its maximum performance, while avoiding fatigue and over-training. While compound exercises (exercises that work multiple muscle groups) are ideal, some muscles lend themselves better to isolation exercises (exercises that zone in on one muscle group), so it’s also crucial to balance your workout to include a mix of compound and isolation movements. Aim for one isolation exercise for every two or three compound. Many weight lifters tend to do only the exercises they enjoy or skip muscle groups all together, like the legs, which are commonly ignored. Many movements that use the legs can actually affect the entire body. Don’t skip movements like squats and deadlifts!

Just like a doctor does an exam, makes a diagnosis and then prescribes a treatment, you should do the same for your workout routine: If you’re not seeing the results you want after giving it enough time, assess where you could be falling short then pour yourself into making the necessary improvements.

Original article written by Brian Maher on Be Well Philly 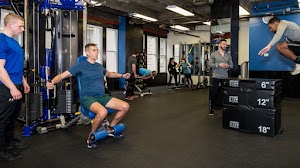